What seven years of leadership has taught me

I've met many managers and leaders, great people and great teams. I've also watched them struggle, and fail, the level of success they craved being out of their reach on projects big and small. For a large part of this group, it starts to feel very personal, becoming a question of "do I have the right balance of people and soft skills, experience and charismatic attitude?" For a majority of these people, it's wasn't them.

The path that led me to realize what was really going on and happening underneath it all, came during one of my first leadership/strategy cycles many years ago now. Spoiler alert... it was a missed opportunity. One that was staring us right in our faces; hiding in plain sight. It was simple, elegant and already being utilized by the business. One that actually brought all the promises of great efficiency, productivity and success. One you're already probably very skilled and great at doing. Yet it's something many use all too infrequently.

Rather than a very dry whitepaper, this series of articles covers the struggles I’ve witnessed for mid-market leaders, CEOs, managers and team leads for businesses primarily sized between 100 and 500 in a relatable, personal tone. This isn’t to say that leaders or other roles from smaller or bigger businesses cannot take away the lessons within.

Within this article I'll discuss a real-world story from my personal experiences, covering in detail the background, the processes and path to resolution. Some of the background and processes behind our struggles will be very familiar to you. You can skip forward to part two “It was time for a change” to get into what we did to improve things. It’s important to note that at the time, much of the path to improvement was manual, however as you’ll read at the end, software now exists to automate much of this. This whole series is also available as a download. 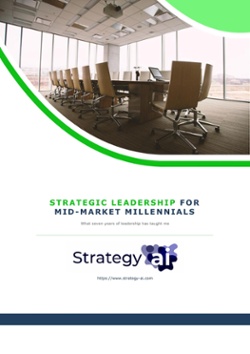 How I realized "it wasn't them" and "it isn't you"

For me it all started in a situation you'll likely be very familiar with... in the planning phase and sessions.

First, the familiar to us all…

We were doing all the right things. The leadership team and top performers came together to discuss the impacts and driving factors on the business. What we saw as the matters of the day and the future that we needed to be focusing on. We put them up on a whiteboard and after some discussions, focused on a few key factors, giving each one a different color. Nothing special and all very normal here, as you’d expect... step one ticked off

Soon we transitioned into the more engaging and collaborative aspect; sharing and brain storming all the initiatives and actions we could collectively think of, adding them to the whiteboard. After some "passionate", sometimes heated discussions, some would be added, others removed, merged or split up. Still nothing special and nothing new… step two milestone ticked off.

Once we were happy with the list, we identified the overlaps between the initiatives and actions we'd identified in step two, with the key driving factors from step one, adding a colored dot next to each initiative or action. Finishing this, we had a multi-colored mosaic; almost abstract picture of our year ahead. Everything seemed right and like we were following the path well-trodden. Everyone was upbeat and high spirited. 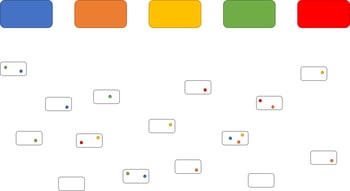 As you’d expect, we moved onto discussing the more businessy aspects: priority, costs and other important factors. Naturally the items that had a large overlap with our key driving factors... essentially the items with more than one colored dot, were championed and rallied behind; seen as an efficient use of resourcing and budget.

From here, we picked three to five initiatives or actions that, as a company, we'd focus on. I'm over simplifying things... greatly over simplifying things, but essentially a visual strategy was born with our key strategic projects identified. This was all very normal, and everything you’d be well versed at. Step three milestone reached.

Then things went off the rails so to speak

This exercise served us really well and set us on our journey of delivery with enthusiasm and high hopes... but things soon started to resemble our pre-strategy driven days. A quarter in and project milestones took longer than expected, as the explosion of tasks seemed to sprout endlessly. Requirements, both business and technical in nature, seemed to keep popping up. Work seemed to be occurring out-of-order and project delivery dates looking very much like a hope, rather than a certainty. It wasn't long and we were starting to drop key components in our deliverables and projects.

The leadership team was confused. It wasn't the first strategy run cycle for the company, it was more like the fourth or fifth. This time the business had hired more people with a background in strategy across the whole business, they'd digitized their business, added automation, integrations, customer feedback cycles and data analysis. It gave everyone more information to work with. We had a good plan of attack, with a solid sense of direction, created in a fully inclusive environment, considerably more data to work with and more tools to speed things up. We had it all, but the improvements were becoming marginal or superficial; in some cases, the problems seemed to have only moved from one part of the business to another part.

What became apparent pretty quickly to me though, was that for all the effort placed into a well-oiled, one week planning session, the keys aspects of that session, that made it so successful, has only been used the one time. The hundreds of tasks that fell out of these strategic projects, over the many months since that planning session, didn't have the same level of inclusiveness that self-managing teams need.

I watched as the months went by, agile cycle after agile cycle rolled on, that what actually got delivered veered off the intended track. Lots of unrelated work items and tasks were being placed into these projects, because the "work" in these tasks was somehow similar, close, related and any other number of justifications for the unintended increase in scope.

I could see the issue, but everyone else seemed "too close to it", and so they couldn't.

The next article in this series covers how we (and you can) identified and measured the size of our issues, how it was presented back to the leadership team and how the business responded.